New Friends – Part III of the Adventures of Jude and Tammy

Posted on September 5, 2013 by AuthorTLGray 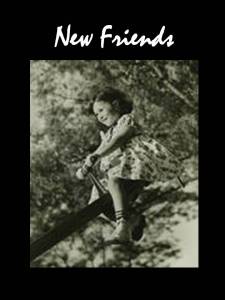 Jude jumped up and down, pumping his little fist into the air.  “Yeah, I smoked you, Tammy!”

Tammy flicked her long auburn hair over her shoulder and smiled up at her celebrating friend.  “You got me this time. But, my turn is next.”  She picked up her favorite tiger-eyed marble and stuffed it into her dress pocket.

Snatching up the remainder ducks, Jude filled his pockets with his treasured marbles.  “What you wanna play next?”  He plopped down in the dirt next to Tammy?  He looked over at her and smiled.  “Just so you know. You’re my best friend, Tammy.”

Tammy wrinkled her nose and looked up at Jude, who had the bright sun behind him, causing her to only see his silhouetted outline.  “You’re my best friend, too, Jude.”

Jude shrugged.  “Okay, cool.”  He looked around and then asked, “Do you want to play hide and seek?”

Jumping up, Tammy bent over and placed a quick kiss on Jude’s cheek and then took off running into the woods.

Jude reached up and quickly wiped the kiss off. He wrinkled his brows and pursed his lips together and grumbled, “I wish she’d stop doing that.” He stood up and shoved his hands deep into his pockets and started walking into the woods, now in no hurry to seek Tammy and her stupid kisses.

Walking down the wooded path, Jude started kicking a pine cone down the trail and wasn’t watching where he went.  Angry at Tammy because he had told her a ton to stop being a silly girl, that he didn’t like kisses, but she didn’t do what he said.  He reared back and kicked the cone as hard as he could, sending it flying into the woods.

The cone hit a nearby tree, pinged back and then rolled down the hill.  Jude took off running after it.  He loved to run.  The cone bopped, bounced and hopped down the hill and then rolled onto the edge of the playground, coming to stop just below one of the see-saws.  “Katy, stop!” He yelled at the girl riding high on the see-saw as it drifted toward the earth toward his pine cone.

Her little feet touched the ground, but she held the see-saw from coming all the way down and then turned her head back toward him.  “Oh, hey, Jude.”

Jude gave her a little wave and quickly bent down to pick up his pine-cone football.

“Can you help me off?” Katy asked, nodding toward the other see-saw rider.

Rearing back, Jude took aim at a nearby tree and launched his pinecone with a mighty throw.  Together the two children watched it fly through the air, hit the bark of a nearby tree and then bounce off into the underbrush.  Jude then reached over and held the see-saw while Katy slid off, and then slowly lowered it for the other rider.

“Thank you, Jude,” Katy answered.  She nodded toward the other rider.  “Silas is heavier than me and every time I slide off, it makes him hit the ground hard.”

Katy smiled at him.  “Do you want to come with me to the pond and race boats?”

Jude poked his hands in his pockets and pulled out a handful of marbles.  “Do you like to play marbles?”

Katy smiled.  “I never played. Can you teach me how?”

“Sure,” Jude answered, and then launched right into explaining the rules of the games as he walked beside Katy toward the sand box.

Together, Jude and Katy played marbles well into the afternoon.  She learned the rules quickly, loved to laugh out loud and squeal with delight every time she sank a duck into the center hole.  Jude loved teaching her how to play and he didn’t mind her giving him a hug every time she sank another duck. Though he had fun, something tugged on the edge of his mind, but he kept pushing the feeling away so he could concentrate on the game.  If he didn’t watch it closely, he could lose, and Jude hated losing more than anything.

It wasn’t too long, Jude heard his mother calling him and he began to gather all his marbles.  Katy handed them all over willingly except for the white shooter he called Snowball.

Jude froze.  He looked down at his marble then back up at Katy.  Everything inside him wanted to snatch his marble away, but he found himself shaking his head up and down.

Katy squealed with delight and reached over and kissed Jude on the cheek.

He wiped the kiss off his cheek and grumbled.  “Tammy, I already told you stop doing that!”

A sinking feeling hit Jude in the center of his stomach as he looked over his shoulder into the darkening woods, back toward where Tammy had ran earlier that morning, where he never went to find her.