Posted on December 4, 2019 by AuthorTLGray 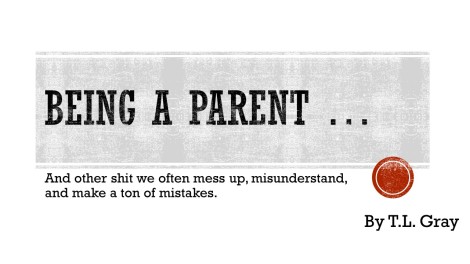 God has given me many gifts.  Most of all, he has given me the opportunity on several occasions to be a parent. I haven’t always been a good parent. I haven’t always made all the right decisions. I have made some really bad choices and made some really bad mistakes.  There’s no ‘but’ in that, either.  I’ve learned some things along the way, mostly from my mistakes.  I suffer still some of the consequences of those choices and mistakes.

I’ve come a long way.  I’ve come a very long way from being that scared young girl facing the decision of becoming a teen mother.  I was terrified.  I lived in hell and felt I had no one in this world I could trust.  I had no one to take care of me. Yet, there was this life growing inside of me – a defenseless child that I would be responsible to care for, to protect, and to provide simple everyday things. I couldn’t even provide those things for myself.  I had dreams. I had an escape plan to run off to the military that was going to take me away from the abuse I lived under and secure me a future – but if I chose her – I couldn’t escape – not yet.  There were days I hated the choices I had. There were times I wanted to give up, to die, especially when I was ridiculed and called names at school (Yes, I was that popular high-school slut wobbling down the halls everyone felt sorry for, or made fun of, or called names, or glared at with their disapproving eyes.) Yet, every time I felt my daughter move within my stomach, my hands would cradle my big belly and hope would grow – hope for a great life, a good future, a little bit of love in my dark gray world.  I would pay the price to make it happen – no matter what it cost me. I was young (16), scared, and didn’t know ANYTHING about being a parent. Hell, I didn’t even know how to be an adult. So, I made some mistakes.  But, everything I did – I did in love – love for her – love for the hope that she was going to one day bring into this world.  I don’t care how she was made – I’m the one that made the decision to bring her into this world.  EVERYONE I knew wanted me to give her up or abort her.  The religious didn’t want me to have an abortion, but they didn’t want me to raise her either.  The rest told me on a regular basis I was wasting my life, sacrificing my future, giving up my freedom when I had another choice.  I didn’t know much, but I already loved her and I wanted her – so I chose her.  It kills me that as an adult she doesn’t choose me, but I still have hope, and not for a millisecond regret my choice. She’s a beautiful, loving, kind woman and I am so proud of her.

I have two other children, who are also now adults, who make me smile every time I hear their voice, or see their texts, or video chat, or am able to wrap my arms around and hug them.  I also have the most beautiful grand-daughter. I love them with a love that is indescribable.  Not because I gave birth to them or genetically related to them.  Not because they’re good human beings.  But, for love.  The love I feel from them and for them. That love isn’t granted just because of genetics.  I never had that love for or from my parents.  Not ONCE, not EVER did they ever hug me – and if they had, I would have not felt that love.  My parents gave birth to me, but they were not parents – they were manipulative abusers that took a long time for me to escape.

I now have another child, another chance to be a mother to someone who needs a mother.  I look at this kid and see the manipulation and emotional abuse he’s been through and I remember that lost, scared, angry little girl I used to be – and I try to be the mother I needed, the friend I could have used, and the love that was desperately missing in my life.  Maybe he won’t have to face the same hard choices I had to face – and he will make better decisions, and his life will reach even greater opportunities.  Most of all – he is loved. Every day.  I am hard on him, I don’t let him get away with anything, and every day is a constant learning lesson – because I want him to be a good man. I want to teach him the things of this world that is going to make him a descent, caring, productive, and good man.  I find it ironic – He now has the opportunity to escape his abusers and run off to the military and secure himself a future.

Being a parent is a privilege, not a right.  There are some really shitty parents out there. I’ve been one at times, but I wouldn’t change one single solitary moment, not even the bad moments – because it was from those moments I learned most.  I didn’t give birth to Anthony, but I am his parent, I am his mother – because I love him and he’s worth everything I do for him. I get the best part of this relationship – his love in return. That is being a parent.  Those who pour love into him …are his mothers and fathers, not genetics. This young man is lucky – because he is now being surrounded by people pouring love, life lessons, instruction, and encouragement into him (thank you Scott).  When he gets into the Navy he is going to be surrounded by new brothers and a new family …and once again I am filled with hope.